The TILO™ is not only the smallest thermal imaging goggle in the world, it also offers many additional possibilities compared to conventional goggles. During development, however, we took great care to ensure that operation remains convenient and uncomplicated during use. However, all more complex functions are accessible to the user via a menu and it is up to the user to configure the device himself to suit the operating conditions.

In the following, the functions and properties are explained and the differences between the devices are also discussed:

Originally, the TILO™ was developed as thermal imaging goggles. Therefore, they have a large viewing angle of 24° for thermal imagers. Only in this way can they also be used well for orientation in the field or even in buildings.

We have already received feedback from some military forces that they are foregoing the use of their residual light amplifier due to the significantly lower weight of the TILO™, as the terrain representation of the thermal image is sufficient.

Basically, the larger the viewing angle, the smaller the range. So if two devices are compared that have the same number of sensor pixels (e.g. 320×256), the device with the smaller angle of view will always have the greater range. It's no different with the telescope; here, too, the narrower angle of view and the longer range make themselves felt in the magnification.

Two typical devices are the TILO-3Z+™ and the TILO-3Z+2×™. Both have the same sensor with 320×256 pixels. As the name suggests, the TILO-3Z+2×™ has twice the magnification compared to the TILO-3Z+™. Therefore, the TILO-3Z+2×™ is well suited for users who attach particular importance to a longer range. With a detection range of 1000m, it is twice as far as the TILO-3Z+™ with 500m. Due to the narrower viewing angle, which here is only 12°, it is far less suitable for use as glasses.

If you want to have a large range and a large viewing angle in one device, you have to increase the number of pixels of the sensor. That's what the TILO-6™ was developed for. With a 640×512 pixel sensor it has four times the number of pixels. Even at small magnifications, the significantly improved sharpness of the image is noticeable with this device. However, the higher resolution becomes particularly clear when using the electronic zoom. Even with a fourfold electronic zoom, you still get a clear gain in detail in the picture. The AI image processing also contributes considerably to this.

The TILO™ range can be considerably increased with a afocal lens 3×. With the TILO-6™ series and the TILO-3Z+2×,™ the lens can even be attached conveniently within seconds with a bayonet lock. Thus, for example, the TILO-6Z+™ achieves a range of up to 3km. The TILO™ is one of the few thermal imaging devices where an afocal lens 3× makes sense, because only by the small pixel pitch of the sensor one can use an afocal lens 3× of a small size which practically does not "swallow" any light (thermal radiation). If one would equip a normal thermal imaging device with such a small magnification lens, the image would become dull especially in bad weather conditions. It is similar to binoculars, which have a small objective lens diameter and are used at dusk.

After the lens has been attached, however, it makes sense to carry out a calibration, which considerably improves the image. For this purpose, the lens is directed onto a rough surface that is as uniform as possible and has approximately the same ambient temperature. Then the calibration is started, which then takes only 0.5 seconds. If the camera or ambient temperature changes, the calibration can be repeated. A key is pressed for this purpose.

We are often asked, up to which distance one or the other TILO™ can be used for the hunt for the recognition of wild animals. Exact statements are hardly possible here. Too many factors play a role here:

Similar problems are encountered in the military application of thermal imaging devices, so the following classification has become established. The target is usually the standing 1.76m tall man: 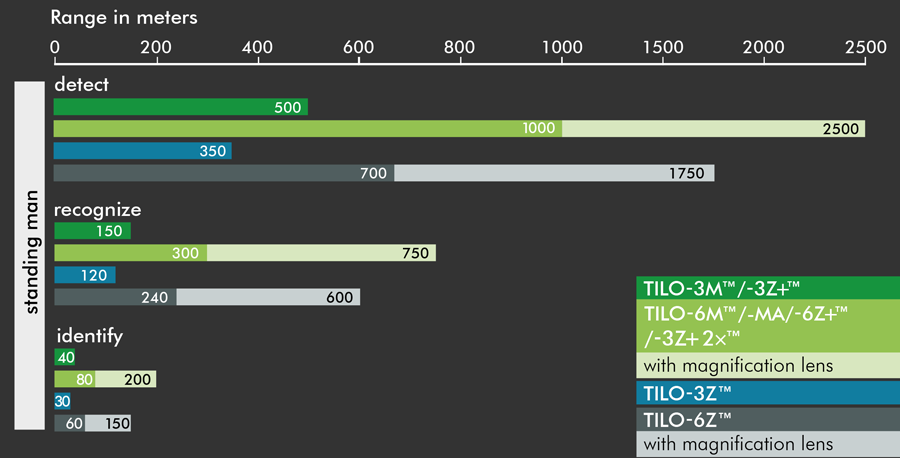 Many people know it, when using an electronic zoom function, the image starts to "pixel" with increasing magnification, i.e. the individual picture elements become visible as larger and larger squares. This is very annoying and leads to the fact that the image can hardly be interpreted meaningfully by the viewer, especially at very large zoom levels (from 8×). In order to counteract this problem, all TILOs™ now have a special AI (Artificial Intelligence) image processing. This smoothes the image at every zoom level so that as few pixels as possible are visible. This artificially increases the resolution. Although such an algorithm is not able to produce a perfectly sharp image at large zoom levels, it has been shown that the viewer can start much more with a blurred image than with a pixelated image of the same resolution. This allows the user to evaluate up to 50% more information of the image, which ultimately significantly increases the range.

Devices of the TILO3™ series have the longest battery life. The TILO-6™ with its 640×512 pixel sensor has a significantly higher consumption and therefore a shorter battery life with the same battery.

Depending on the application, there are now various possibilities to equip the devices with batteries or rechargeable batteries.

Here a battery of the type CR123 finds place. Batteries of this size are not recommended, as they have too little battery life. In this configuration the TILO-3Z+™ weighs only 100g and runs 3:15h. Recently we have received reports that this time is supposedly not reached. But the times could only be confirmed with us. However the following is to be considered:

By replacing the battery cap 2 batteries of type CR123 can be inserted. This more than doubles the battery life. A special battery (16650) can also be inserted in this compartment, which also achieves a significantly longer battery life. It is recommendable to operate the TILO-6™ with the battery extension, as a pleasant battery life can thus be achieved. Therefore, this accessory is also included in the standard scope of delivery of the TILO-6™ series.

If it gets longer again, the TILO™ can be operated with the external power supply for approx. 28h permanently. The Power Bank is charged at a standard USB port. It is therefore a cost-effective solution. If required, any other 5V Power Bank (mobile phone accessories) can also be connected to the cable.

Since the TILO™ is an uncooled thermal imaging device, the sensor must be calibrated in one way or another. The different TILO™ series use different mechanisms for this. They are explained below.

For this purpose a small plate is mechanically folded for 0.5s in front of the thermal image sensor. Then a soft click is audible and for this moment the image freezes briefly. Before the shutter process, a small green square appears at the edge of the image to indicate the forthcoming process. As long as the device has not yet reached the operating temperature, this process takes place more frequently. Then only every 5-10 minutes. Since the shutter requires full batteries, it can happen that it is set when the batteries are almost empty. This is indicated by an empty green square. This is not a major problem as there is an alternative with manual shuttering.

A special case is the manual calibration when using the afocal lens 3×.

The TILO-6™ does not have an automatic shutter, but a software algorithm that continuously optimizes the image. This algorithm may take a few seconds to minutes to generate an optimal image. In order to shorten this time, a manual shutter process can be done at any time.