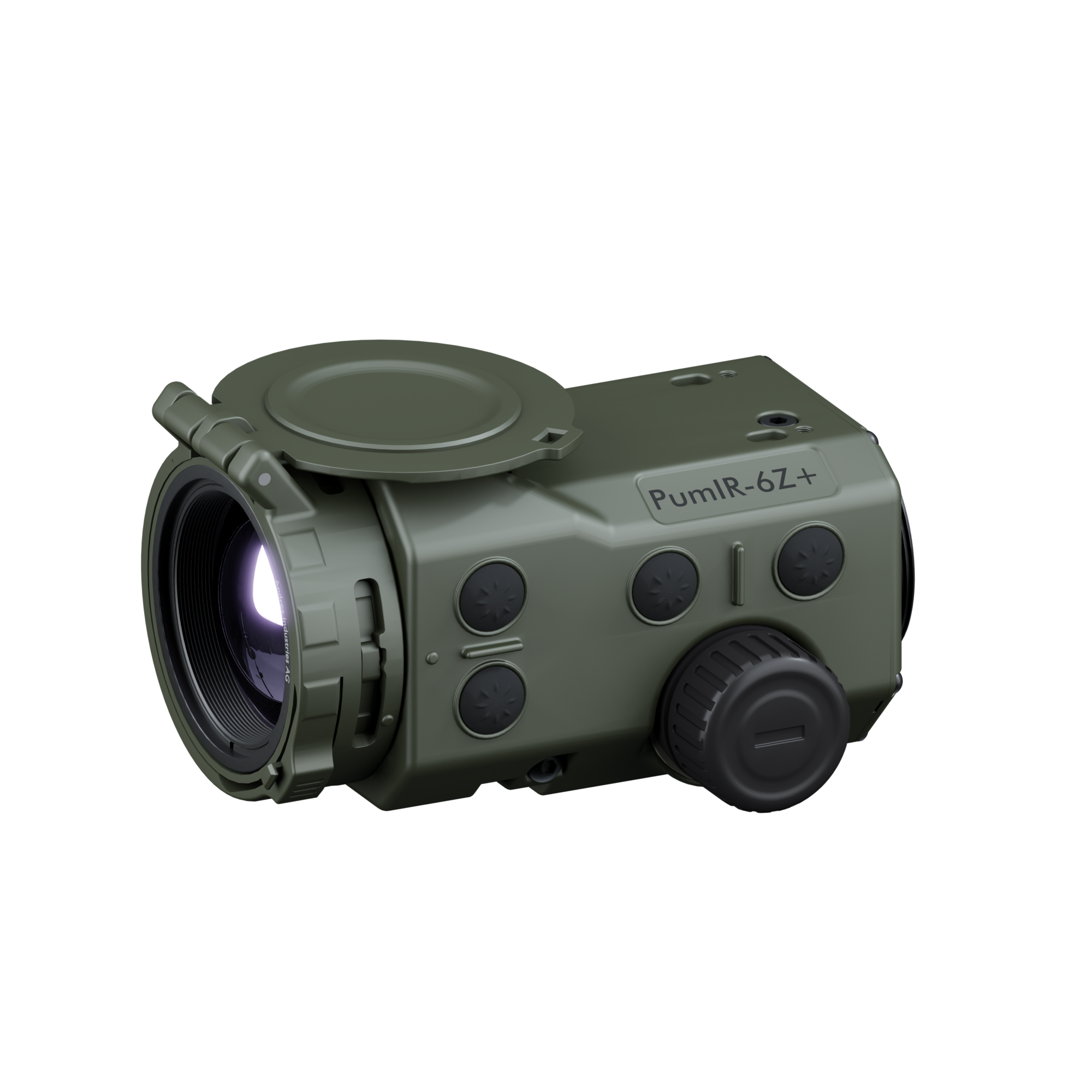 Our latest thermal imaging device is the PumIR. With a total weight of 300g and a length of 10cm, it is significantly smaller than the TigIR, but in combination with the appropriate attachment lens it has a 30% higher range of 4km. Especially this long range combination with a weight clearly below 500g is unique in its compactness worldwide. Due to its low profile design, it is well usable with tactical scopes that have a reflex sight, such as the 4x32 ACOG with RMA from Trijicon. Alternatively, an ACRO from Aimpoint can be mounted on its top.

Of course, the PumIR series also has all the popular features of thermal imagers developed by Andres Industries.

The PumIR™ is expected to be available in the fourth quarter of 2022. 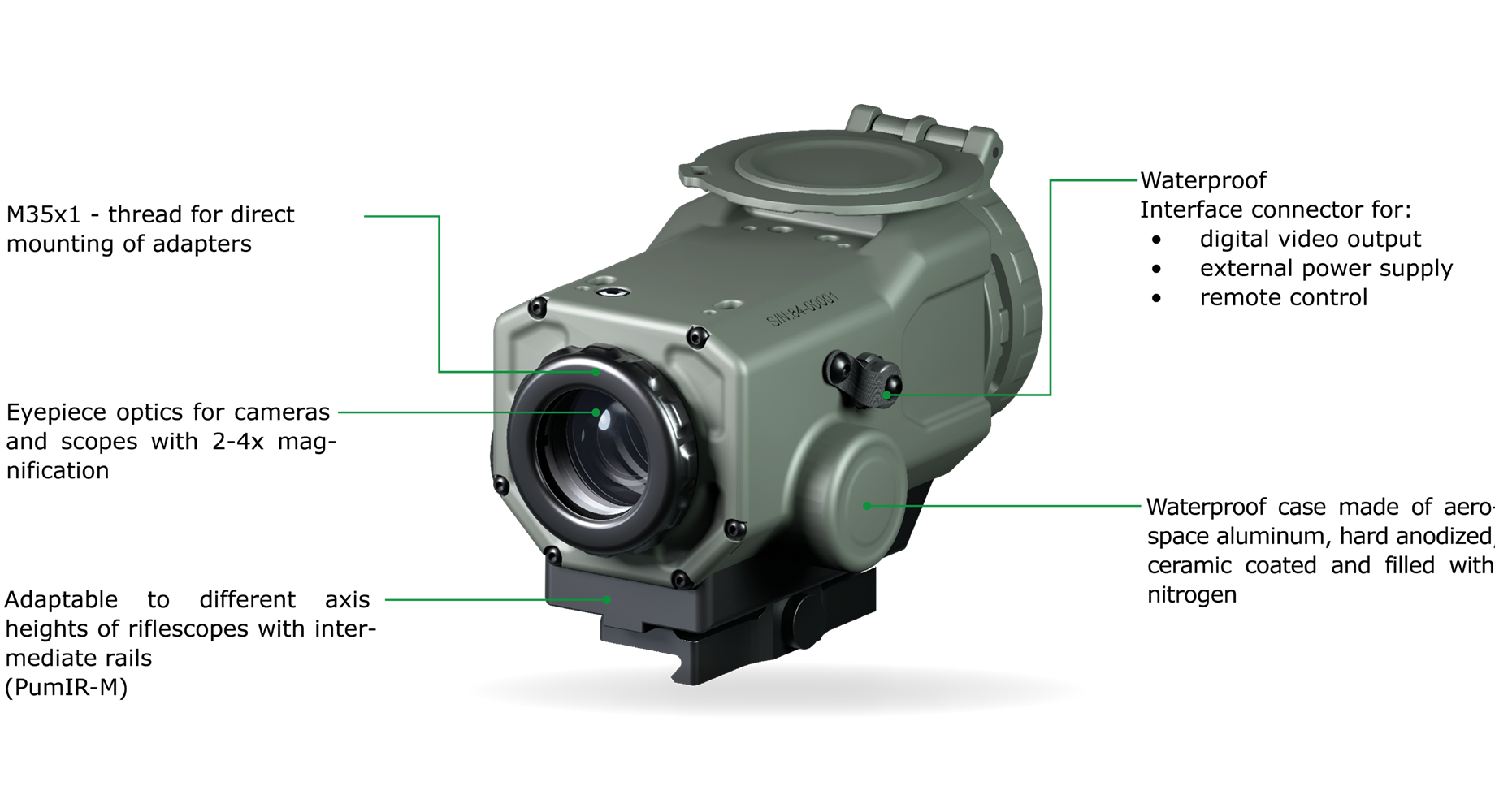 The PumIR-M was developed for government users such as police and military, where the device can be mounted directly on firearms (STANAG-Rail) using the particularly repeatable ERATEC mounting. With the different Tripod Rails the device can be adapted to different optical axis heights. We also manufacture special versions upon customer request. The M versions of our PumIR series also have an integrated reticle. This means that the device can be used directly as a thermal imaging sight even without a scope. Military users particularly appreciate the advantages of the PUMIR-6M.5, as it allows tactical targeting optics with 4x magnification to be used with a full angle of view. The Tripod Rails are also used for mounting on tripods when the PumIR is used as a stationary device for observation. 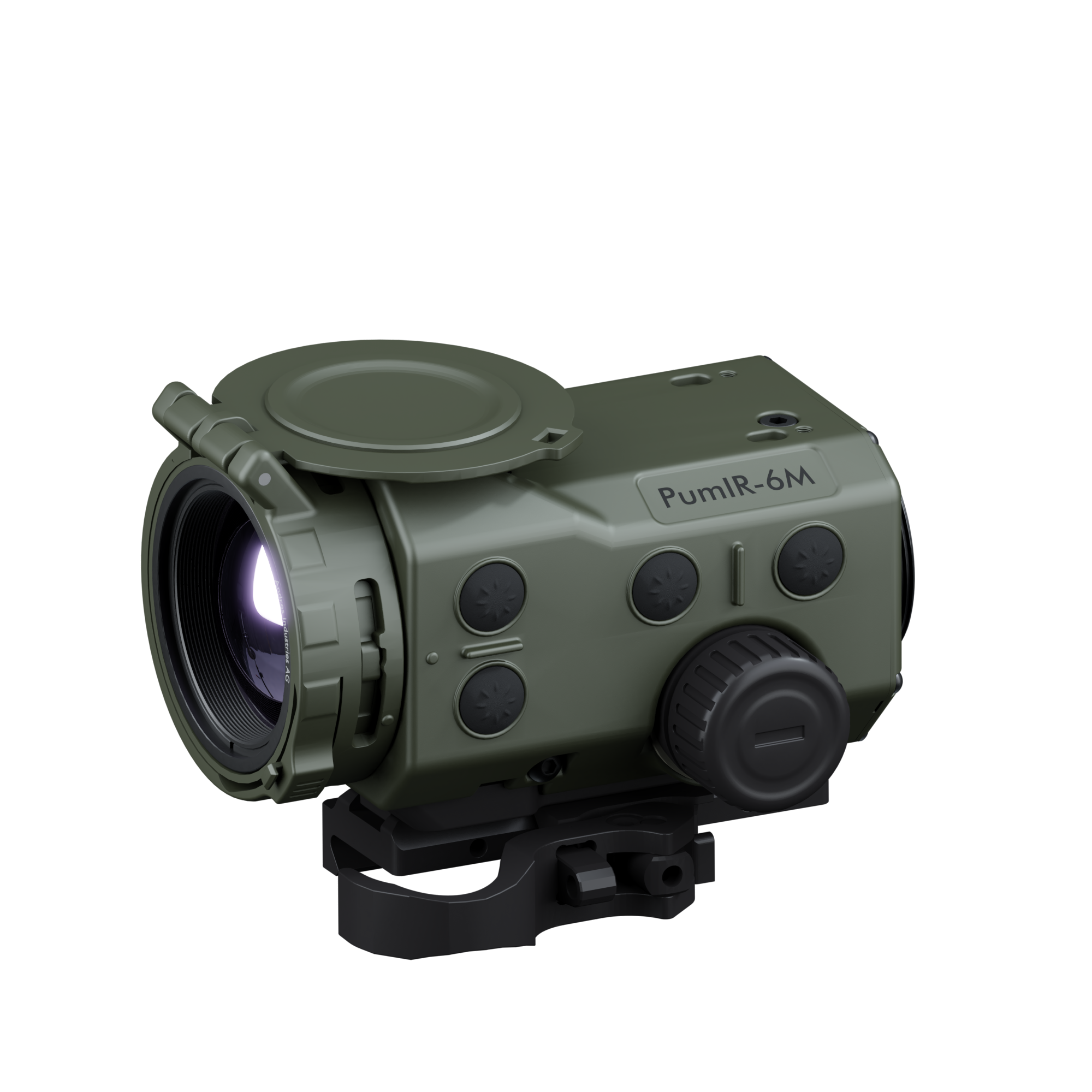 Why is the image in my attachment so blurry?
You have powerful optics and the best attachment in the world. But when you combine the two, the image is pixelated and blurry? Then they are not properly matched. With the PumIR, we have a solution to this problem for the first time. Both the civilian and government versions are available with a reducing eyepiece optic. This allows the use of riflescopes that have a higher magnification than the recommended 2x magnification. Thus, even with scopes with a 3-4x magnification, the entire image can still be seen. It should be noted that collimation, i.e. shooting the rifle with the PumIR.5, is mandatory. 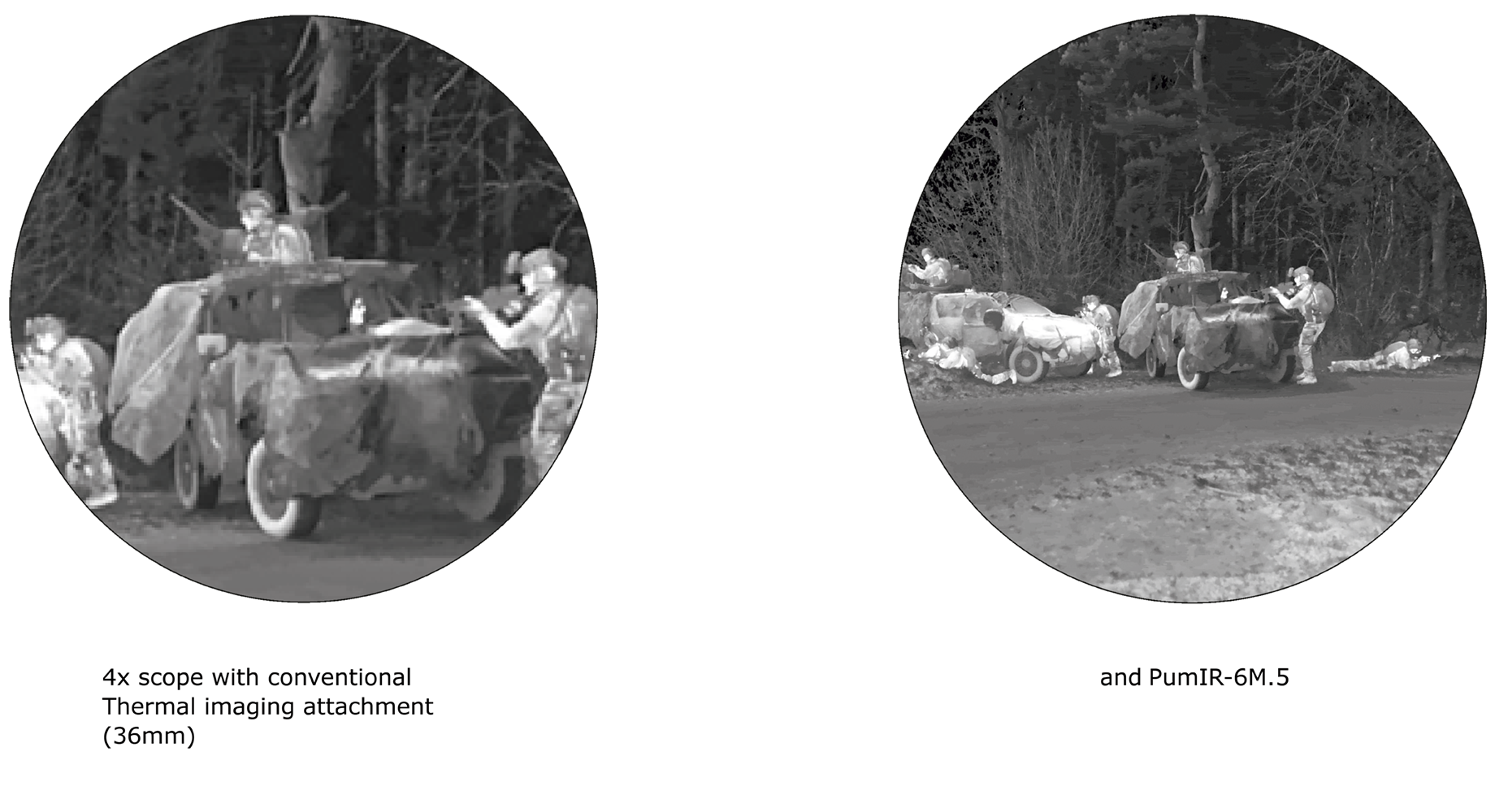 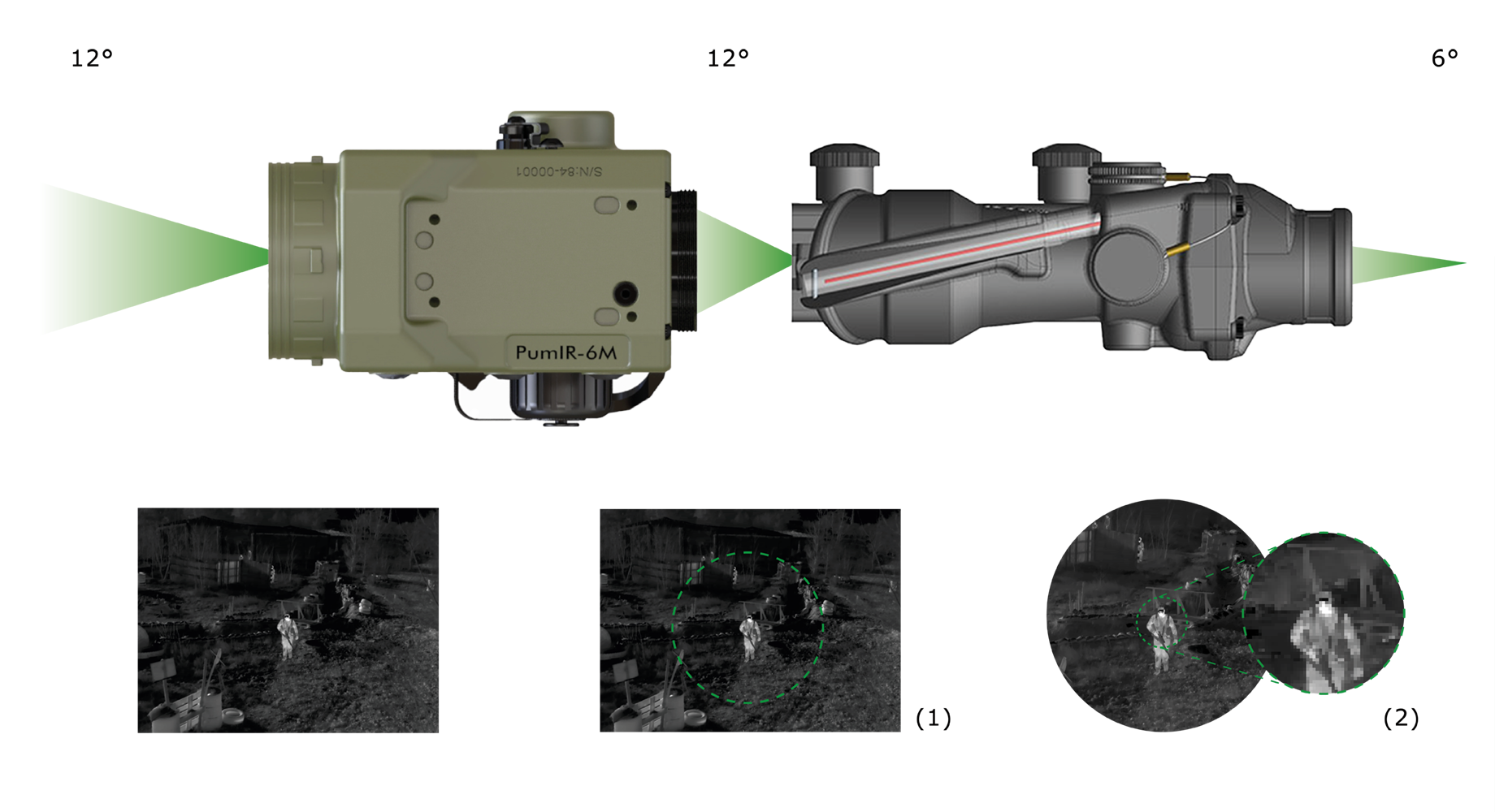 The PumIR-6M™ is similar in design to conventional thermal imaging attachments. It has 1x magnification and has a range of 2km with its 12° angle of view (horizontal). It works best with scopes that also have a 12° angle of view. Such scopes usually have a magnification of about 2x. Then almost the entire thermal image sensor is also imaged in the scope.
Advantage: Since the PumIR in this case has a 1:1 magnification, the reticle with its markings can be used directly for range estimation or placement correction. Disadvantage: An ACOG with a 4x magnification usually has an angle of view of about 6°. This results in only a small part of the image being displayed in the center of the OLED (1). The high magnification then leads to disturbing pixelation of the image (2). 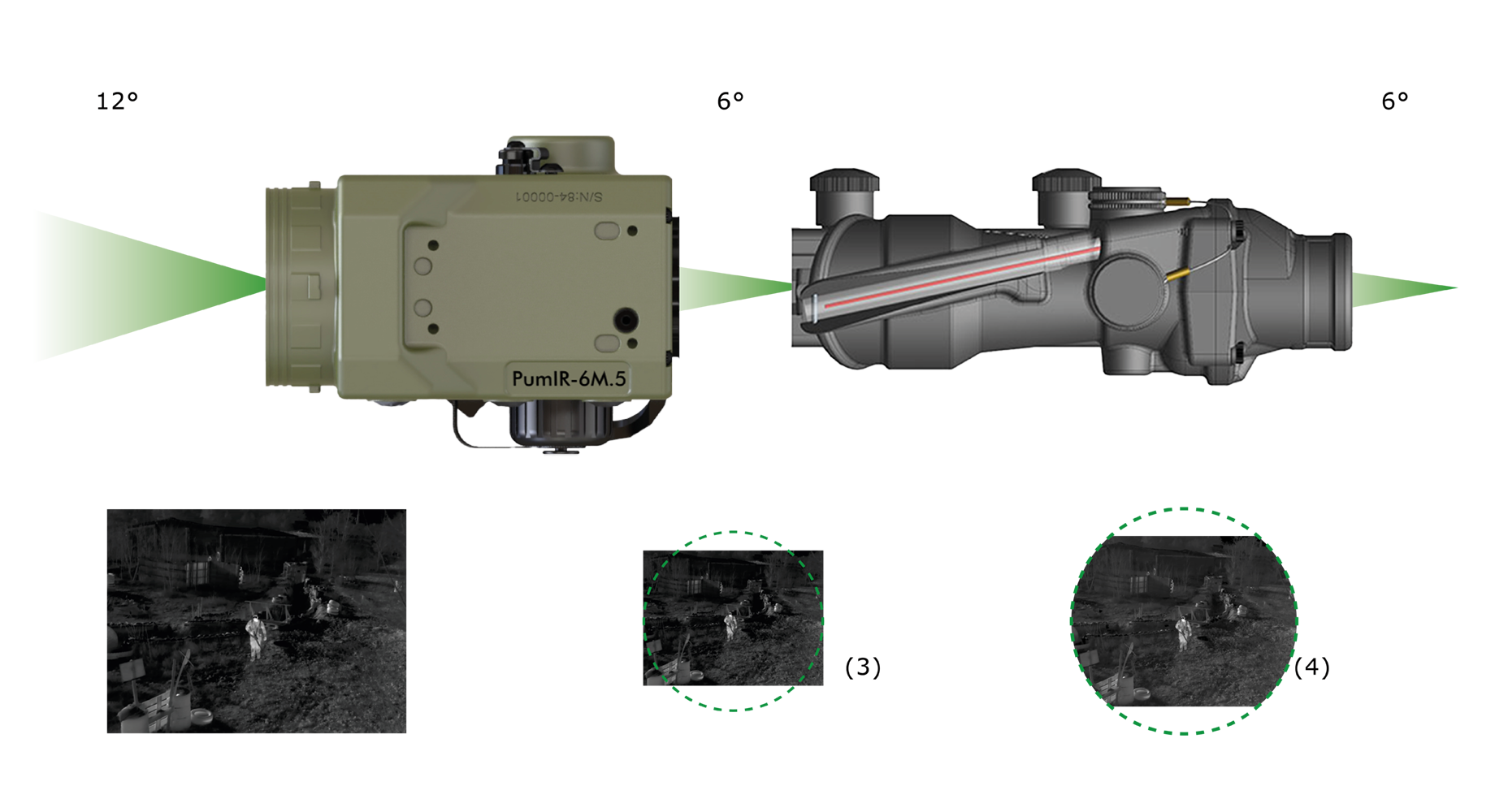 With the PumIR-6M.5™, the objective viewing angle is the same as with the 6M. So the range remains the same. However, we have installed a special eyepiece that only has a 6° viewing angle. This results in an overall reduction of the OLED image in the eyepiece (3). Advantage: The 6° viewing angle in the eyepiece now corresponds exactly to the 6° viewing angle that the 4x ACOG also has. Thus, the ACOG can see almost the entire OLED in the eyepiece (4). This results in a 100% increased overview and a 4x sharper image.
Disadvantage: Depending on the distance, the markings in the reticle are no longer correct with a simple digital magnification. To make the correction values correct again for longer distances, the PumIR must be operated in 2x digital zoom. 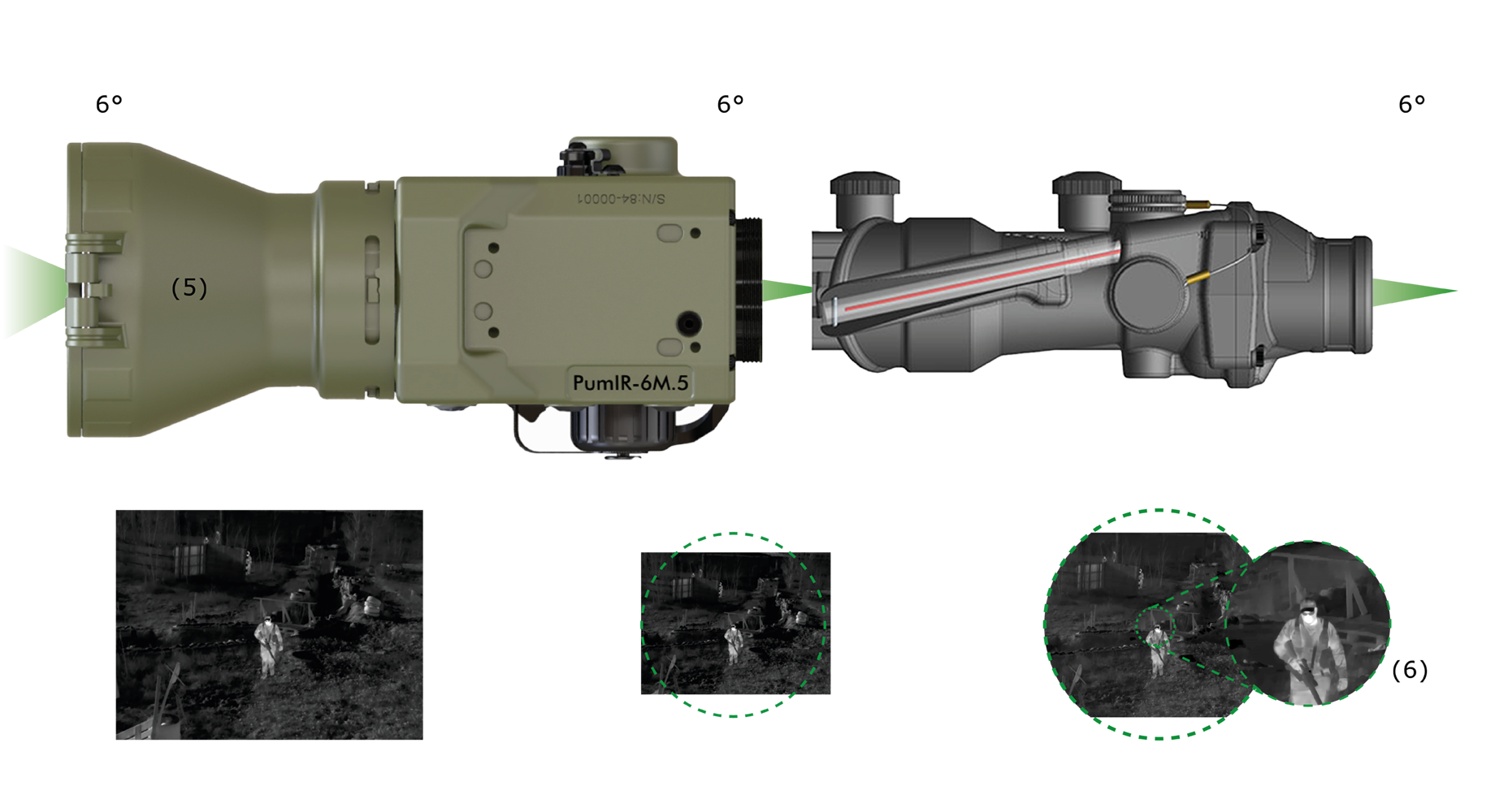 Through the afocal magnification lens (5), the PumIR-6M.5™ achieves the same as before with the digital zoom, but here, of course, the image quality is 4x better, since it is an optical and not a digital magnification (6). In this combination, the full resolution of the sensor with its 640 pixels is visible in the ACOG.

1. Level: Simply open the flap and get started. The device starts with the last selected settings. You do not need to press a button for this.

2. Level: With 2 buttons, you can directly reach all advanced mission-relevant functions such as zoom, filter selection and brightness adjustment without having to switch to a menu.

3. Level: Only here can you access the settings menu, where you can set the collimation, for example.

This technology is not just a simple edge smoothing. Instead, an AI algorithm vectorizes the sensor image at digital zoom, reinterprets it and outputs it in a higher resolution on the display. Even at 8x digital magnification, individual pixels are barely visible. This results in a sharper, but above all high-resolution image. For this reason, we also recommend using the digital zoom levels when used as an attachment, as they can significantly increase the range.

Since this is an export-restricted product, we require a copy of your ID card after you have placed your order, as well as an end user declaration, which you will receive by mail. 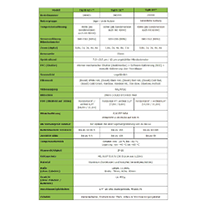