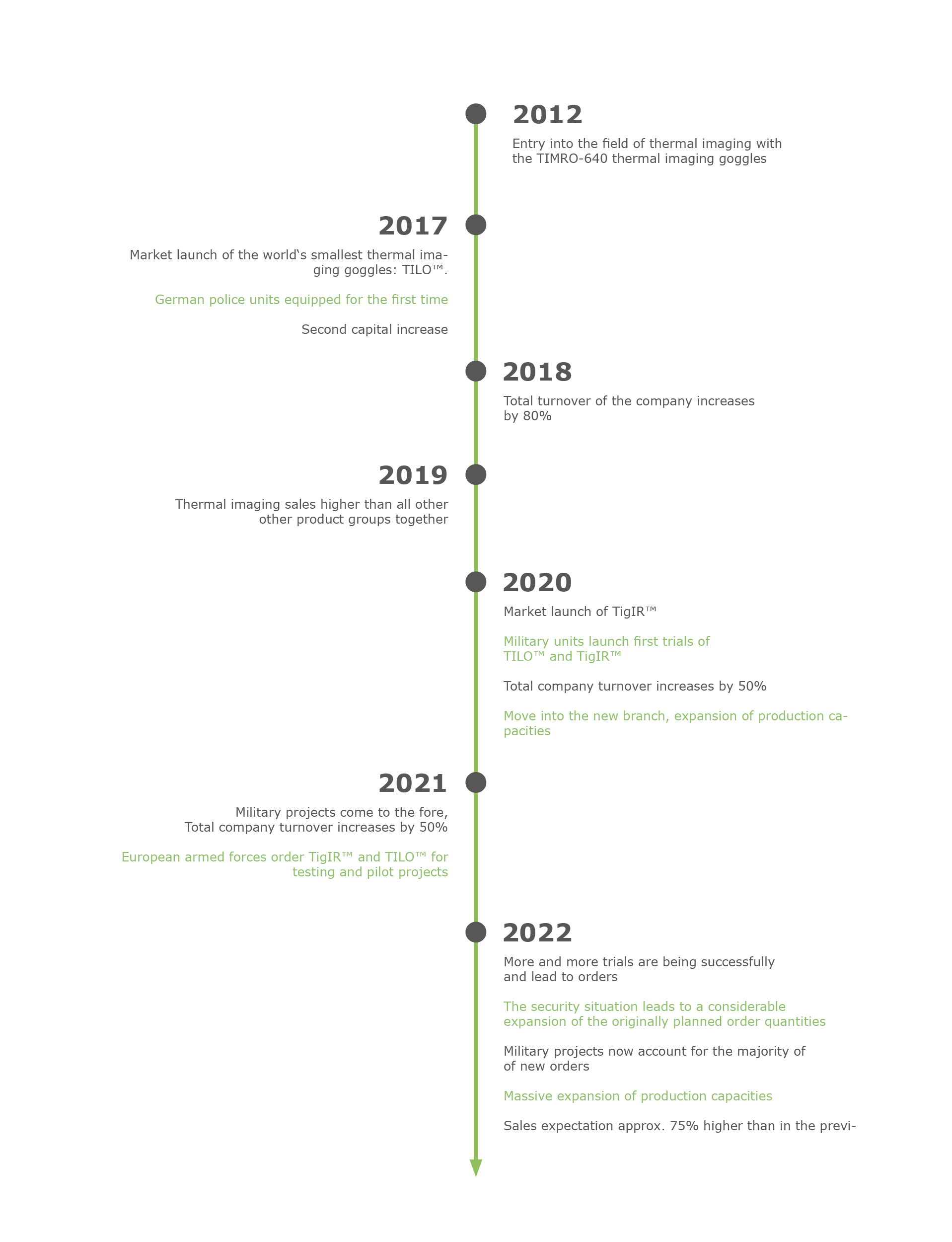 The roots of Andres Industries AG go back to 1999, when founder and board member Dr Björn Andres developed an impact-resistant cover for his handheld during his studies. Interest in the company's own design quickly became apparent. Initially, it was only distributed among his own circle of friends, but due to increasing demand, it was made available to an ever-growing clientele.

In 2006, the now firmly established company was finally converted into a public limited company - Andres Industries AG has been trading under its current name ever since. In the first few years, the company's main focus was exclusively on the development and sale of impact-resistant and waterproof enclosures. In 2012, the company was realigned with a focus on thermal imaging technology. The aim was to make the company more independent of developments in the IT market.

It took years before the first thermal imaging devices were able to contribute a significant part to the overall turnover. In the meantime, the company continued to work on implementing the wishes of its professional customers - in the first years mainly special police units - with the highest precision in existing and new developments. After this was achieved with the TILOTM - the smallest thermal imaging goggles in the world to date - business quickly picked up. In 2019, for the first time, sales in the thermal imaging segment were higher than those of all other product lines combined.

The launch of the TigIRTM the following year led to a renewed growth spurt for AIAG. This is an attachment that combined an above-average range with an unprecedented short and lightweight design. The success of the TigIR is based on the fact that many NATO forces are planning to upgrade their existing machine gun stocks with thermal imaging technology in the next few years. For technical reasons, only particularly short thermal imagers such as TigIRTM or TILOTM are suitable for this purpose. Although so far only test and pilot samples have been sold to the customer states, which are mainly based in Eastern Europe, the company has experienced annual growth of 50% since 2020. This is due, among other things, to the fact that special emphasis is placed on taking into account the individual needs and suggestions of the respective armed forces in the cooperation with military procurement agencies, and that these are ultimately integrated into existing or new products by our development teams.

A tailor-made approach that also pays off. From a current point of view, all current projects seem to be leading to a successful conclusion. What's more, not least because of the worsening security situation in recent months, some customers are looking to increase their ordered quantities of thermal imaging goggles and attachments many times over what was originally planned.

In anticipation of the company's current growth, a more modern and larger company location was moved into in Berlin Lichtenberg as early as 2020. Here, in addition to the necessary systems for quality control, there is also a sufficiently large clean room for sterile precision work. An increase in capacity on a larger scale is therefore not an obstacle and AIAG can continue to manufacture highly complex devices in its own production facilities. Thus, it remains the company's declared goal not only to develop the most advanced thermal imaging devices in Germany, but also to manufacture them in Berlin.

For this purpose, the company can rely on a growing number of motivated and competent employees. Even though the current incoming projects are associated with an incomparably high demand for personnel in the company's history so far, the board of Andres Industries AG is confident about the future. Only recently, an integration programme for Ukrainian employees was successfully started and the company is in a position to pay above-average salaries for its top performers.

In view of our self-imposed demands, this is also necessary. With the aim of pushing the boundaries of the possible a little further into the future, at least two new thermal imaging devices are to be launched as early as next year. Looking back at the company's career so far, as well as at the current market forecasts, it is highly likely that this trend of accelerated company growth will continue in the coming years.